You are here: Home

Update from CCC on CWC Agreement to acquire Columbus

The CARICOM Competition Commission (“the Commission”) hereby provides an update to its statement published on www.caricomcompetitioncommission.com on 10 December 2014 and issued to media organisations in Member States throughout the region, regarding the agreement by Cable and Wireless Communications Plc (“CWC”) to acquire Columbus International Inc. (“Columbus”).

The indicative conclusions of the internal assessment have given the Commission ‘reason to believe’ pursuant to Article 176.1 of the Revised Treaty of Chaguaramas, that the announced agreement between CWC and Columbus has the potential to prejudice trade and prevent, restricts or distorts competition within the CSME  with the possibility of cross-border effects.

Accordingly, the Commission has written to the National Competition Authorities (NCAs) of Member States pursuant to Article 176.1 to “request the national competition authority to undertake a preliminary examination of the business conduct of the enterprise.”

Article 176.2 of the RTC, states that: “Where a request is received according to paragraph 1, the national competition authority shall examine the matter and report its findings to the Commission within such time as may be determined by the Commission”.

The Commission has  requested the NCAs complete the preliminary examination within 30 days from the date of receipt of the written request.

The Commission invites stakeholders and consumers in the region to share their views with the National Competition Authorities, national telecommunications regulators or ministries with responsibilities for telecommunications, in order to facilitate the preliminary examinations. Stakeholders or consumers may also contact the Commission via its website http://www.caricomcompetitioncommission.com/en/contact to provide their views.

The Commission remains cognizant of the key objectives of Article 169. As such, the Commission is a strong advocate of efficiency and rivalry among firms in national and regional markets in the CSME, and advocates that the benefits to be derived must be shared among all stakeholders in an equitable manner.

The Commission remains committed to a fair and transparent process in the determination of all regulatory matters where the interests of Member States, business and consumers must be considered. 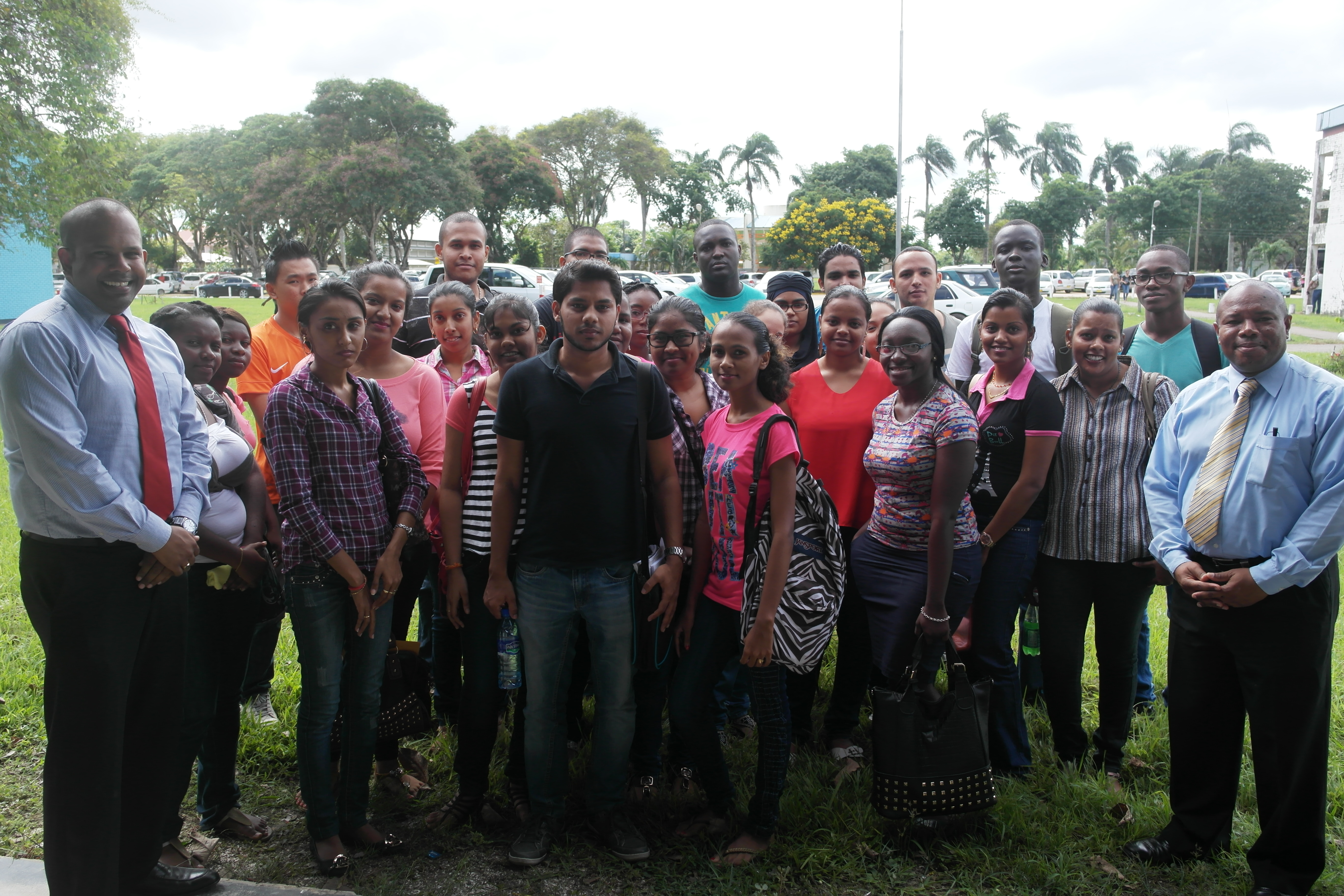 On Monday the 15th December 2014 the CCC delivered two presentations to students of the Anton De Kom University in Suriname. These presentations were delivered by Musa Ali, Registrar and Barry Headley, Senior Economist of the CCC on the topics “Caribbean Community - Benefits and Challenges of Economic Integration” and “A Brief Introduction to the Commission and its Role in Economic Integration”. 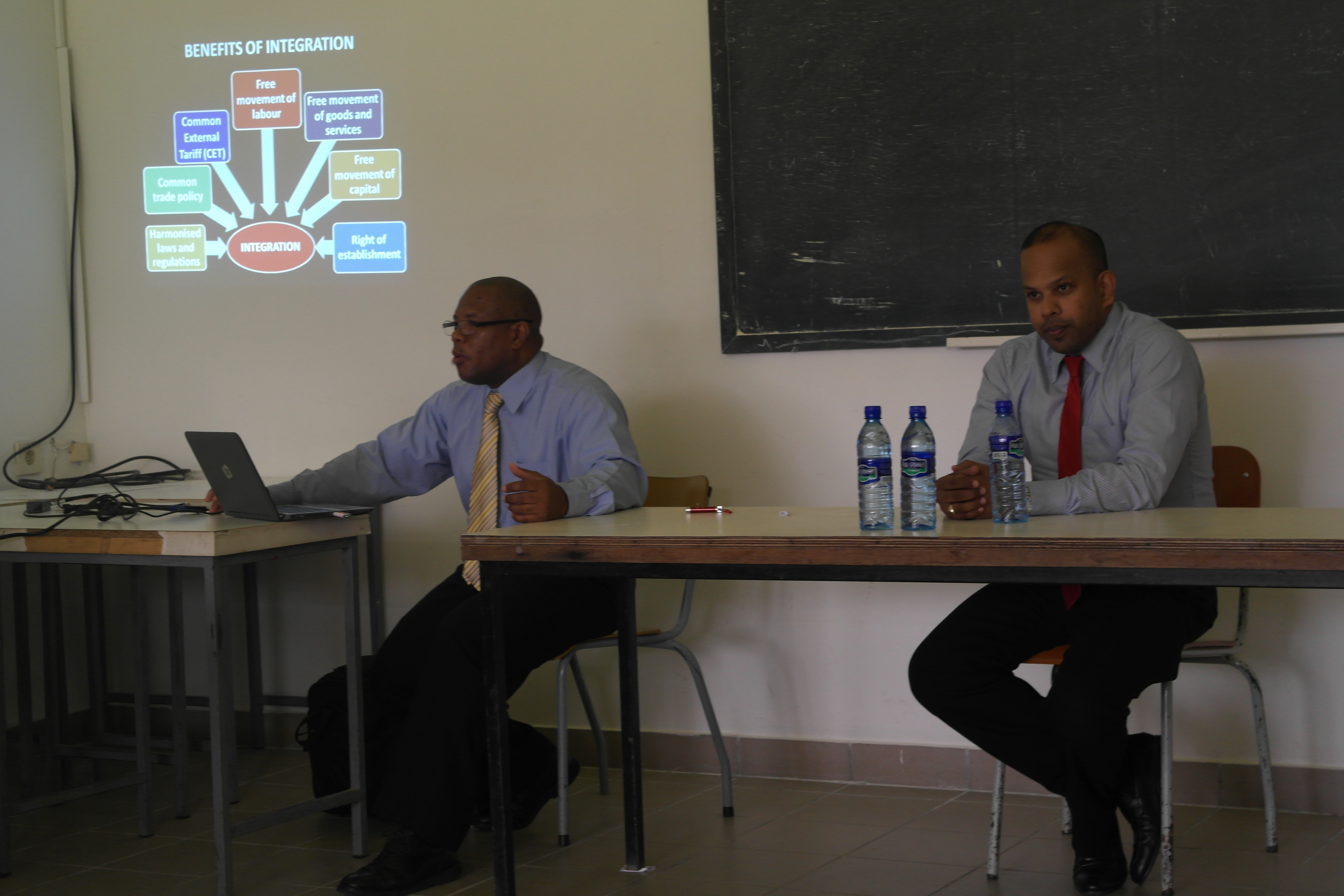 This outreach initiative was executed after an invitation from the Lecturer Mrs. Leysner to the CCC to deliver presentations as guest lecturers during her class on Economic Integration for students of economics.

As part of its mandate under the Revised Treaty of Chaguaramas (RTC) to (a) facilitate the exchange of relevant information and expertise and (b) develop and disseminate information about competition policy, and consumer protection policy, the CCC welcomed this opportunity.

The CARICOM Competition Commission (“the Commission”) as part of its monitoring of business activity in the CSME took note of the announced transaction on 6th November 2014 by Cable and Wireless Communications Plc (‘CWC’) and Columbus International Inc. (‘Columbus) and began conducting an internal preliminary assessment of the transaction with all available public information.

The Commission will make a further announcement at the conclusion of its internal review process on its strategy and plans for addressing the announced transaction.

The Commission is therefore a strong advocate for efficiency in the working of national and regional markets in the CSME with the benefits to be shared among all stakeholders in an equitable manner.

The Commission wishes to state that regardless of jurisdiction (national or regional) it is vital that the Governments of Member States and regulators ensure the principles of competition are considered in the review process for making a determination on this transaction. It is vital that the impact on competition of the proposed transaction be considered in a thorough manner, and that any determination made is designed with competition enhancing outcomes in mind.

The Commission as a regulator is committed to a process that is fair and transparent in the determination of any regulatory matter where the interests of both business and consumers must be considered.

The International Law Section of the American Bar Association [ABA] threw the spotlight earlier this week at its North American Forum in Vancouver on doing business with the region and collaborating abroad. A special panel at the Forum was entitled Welcome to the Club: Caricom’s Competition Authority Joins Its Neighbors from Canada, Mexico and the US in Antitrust Enforcement. Dr. Kusha Haraksingh, Chairman of the Caricom Competition Commission [CCC] was invited by the ABA to be the lead speaker at this event and he was joined by Cariforum partner Michelle Cohen, Chair of Procompetencia, the Dominican Republic’s Competition authority. The meeting examined the challenges of cross-border Competition and Cartel reviews and explored how antitrust agencies could cooperate, especially in the context of emerging disciplines on data protection and security in the digital age. 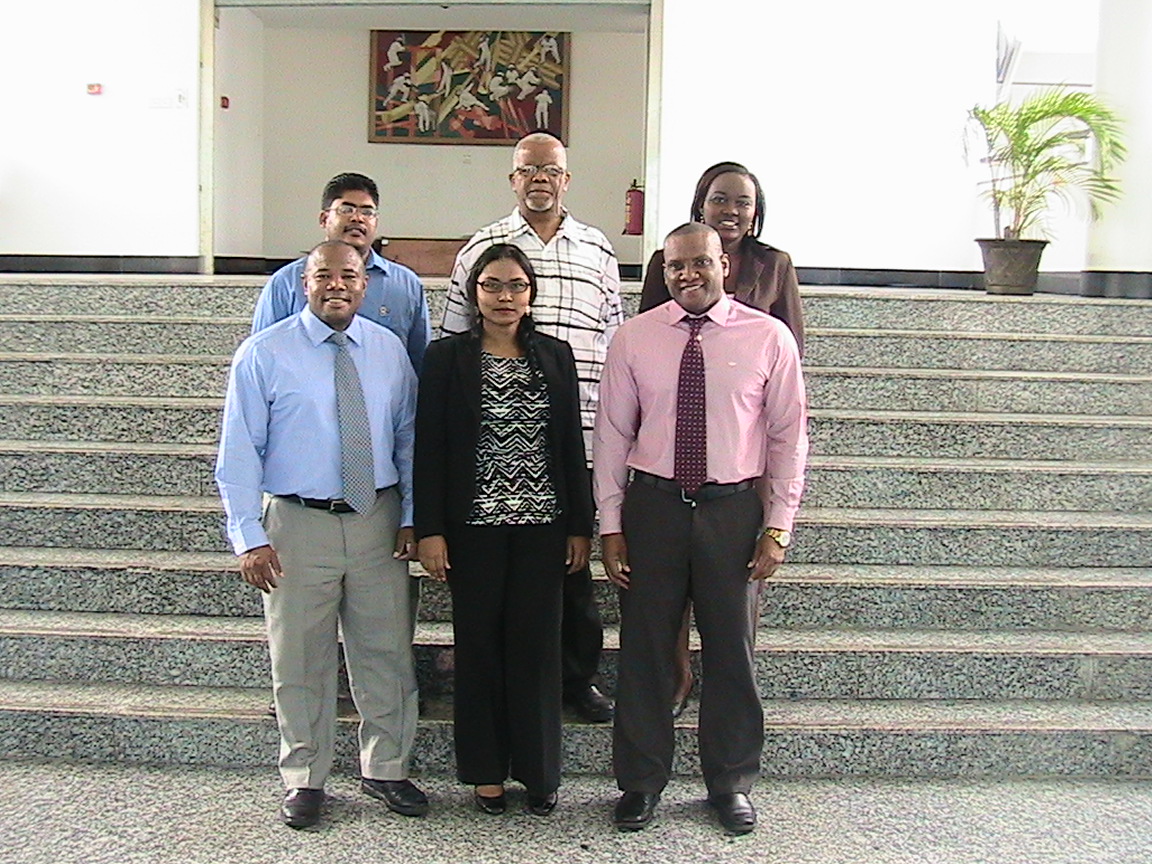 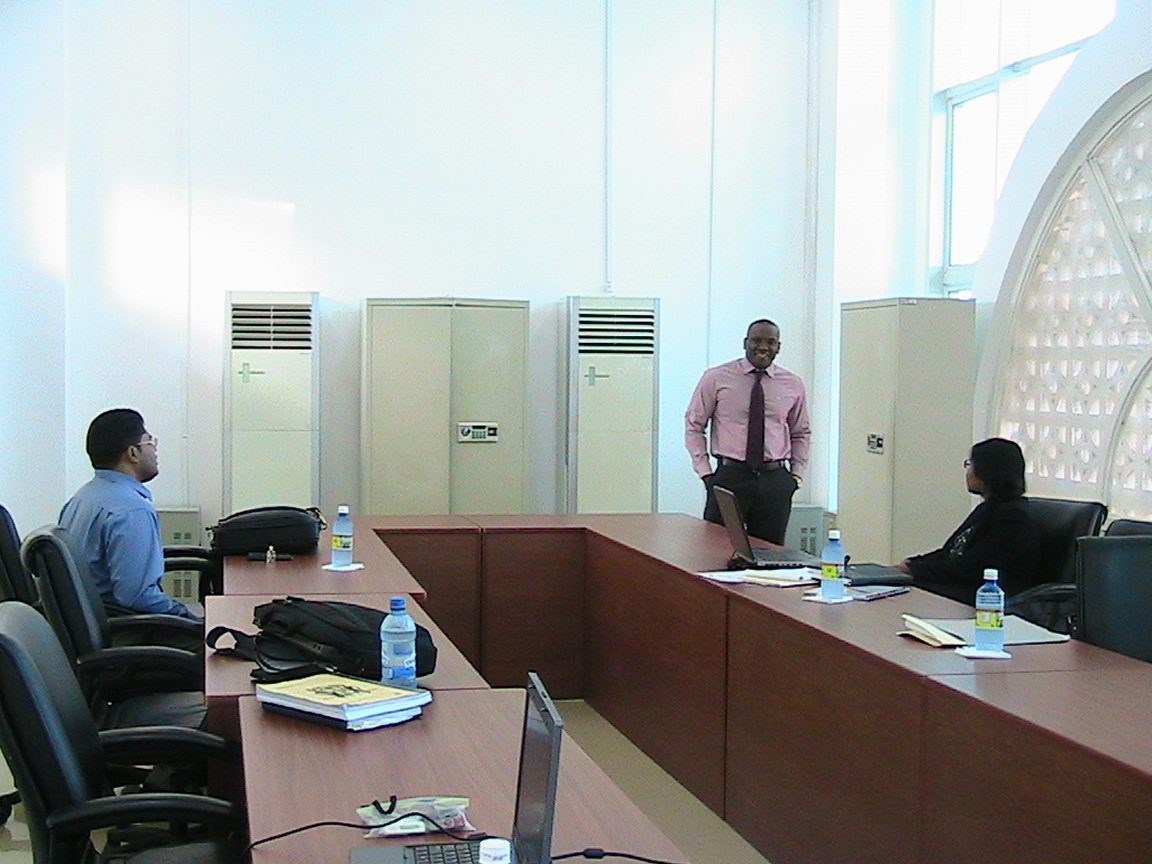 The CCC delivered training to the technical staff of the Guyana Competition and Consumer Affairs Commission (CCAC) in response to a request for technical assistance from the CCAC.

CCC Provides Training In Competition Law In Trinidad And Tobago

CCC PROVIDES TRAINING IN COMPETITION LAW IN TRINIDAD AND TOBAGO

Chairman of the CCC, Dr. Kusha Haraksingh, who was available to congratulate the Commissioners on their appointments, also discussed the international dimension of competition law and stressed the importance of cooperation with other national competition authorities on competition enforcement matters. Dr. Haraksingh also pledged the continued support of the CCC towards the full operationalisation of the TTFC.

Chairman of the TTFC, Justice Amrika Tiwary-Reddy, hailed the training as an important step in Trinidad and Tobago fully implementing its national competition framework.

This report highlights the work of the CARICOM Competition Commission (CCC) for the second quarter of 2014, in the areas of Competition Law and Policy and Consumer Welfare and Protection in the CARICOM region. The work of the CCC is guided by the institution’s mandate under Chapter VIII of the Revised Treaty of Chaguaramas (RTC). Consequently, the document is structured to highlight, in some cases, the relevant provisions within the RTC that each activity falls under. For the full report please click here.

Trinidad and Tobago Appoints Commissioners to the Fair Trading Commission

The CARICOM Competition Commission is pleased to announce that on 9th July, 2014, The Honourable Vasant Bharath, Minister of Trade, Industry, Investment and Communications of Trinidad and Tobago presented the appointment letters for the three Commissioners of the Fair Trading Commission. The appointment of the Commissioners marks a giant stride for Trinidad and Tobago in fulfilling its mandate under Chapter VIII of the Revised Treaty of Chaguaramas.

Click here to view the official press release from the Ministry of Trade, Industry, Investment and Communications of Trinidad and Tobago.

Ad Hoc Expert Meeting: The role of competition law and policy in fostering sustainable development and trade through the enhancement of domestic and international competitiveness of developing countries

Competition refers to rivalry among firms in the marketplace. It also extends to envisaged or potential rivalry. Competition policy refers to government policy aimed at preserving or promoting competition among market players and at promoting other government policies and processes that enable a competitive environment to develop. In 1980, the United Nations Conference on Restrictive Business Practices approved the Set of Multilaterally Agreed Equitable Principles and Rules for the Control of Restrictive Business Practices (the so called "UN Set on Competition Policy"), a multilateral agreement providing a set of equitable rules for the control of anti-competitive practices, which recognizes the development dimension of competition law and policy and provides a framework for international cooperation and exchange of best practices. As acknowledged by the Accra Accord (paragraph 104), UNCTAD is the focal point for work on competition policy and related consumer protection policy within the United Nations system. In this capacity, UNCTAD seeks to promote the use of competition law and policy as tools for achieving competitiveness, growth and development, by providing a forum to member States for intergovernmental policy dialogue and consensus-building in the area of competition (and consumer protection laws and policies), with close linkages to existing networks of competition authorities. In this context, UNCTAD is organizing this Ad Hoc Expert Meeting on Monday July 7 2014, preceding the 14th Session of the IGE on Competition Law and Policy.

CARICOM to be represented at UNCTAD Meetings in July, 2014

The CCC has been invited to attend the Fourteenth session of the Intergovernmental Group of Experts on Competition Law and Policy (IGE) that will be held 8-10, July 2014. The IGE session will be preceded on 7 July, 2014 by the Ad hoc Expert Group Meeting on "The Role of Competition Law and Policy in Fostering Sustainable Development". The IGE session will also be followed by the 5th Research Partnership Platform (RPP) on competition and consumer protection policies on 11 July, 2014.

The consultations during the Fourteenth IGE session will focus on the following topics:

(b) Communications strategies of competition authorities as a tool for agency effectiveness;

(d) Voluntary peer reviews on the competition laws and policies of Namibia, Seychelles and Philippines;

All relevant information on the substantive discussions, reports as well as logistical aspects of the conference can be found here.